The Lakes Region is becoming an increasingly unaffordable place to live, but finding a solution remains enigmatic 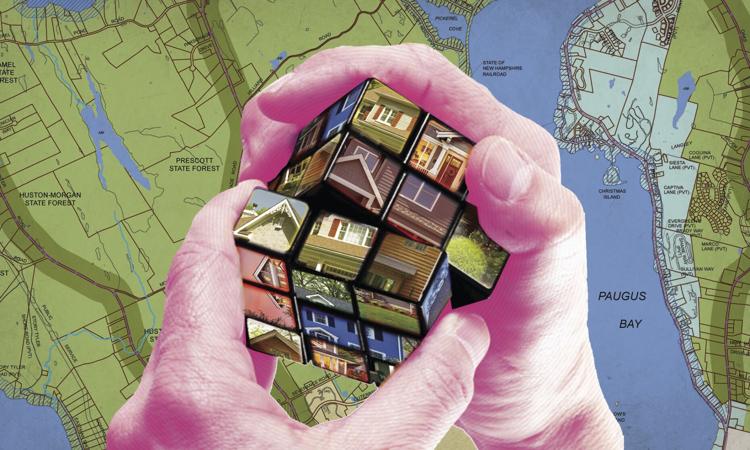 Despite projects to expand housing inventory on the horizon, Belknap County’s vacancy rate of 0.7 percent is drastically below a healthy rental market threshold of 5 percent.

The average home price for a single-family home was well over $360,000 as of September. With such high costs and limited inventory, home ownership and even finding an apartment is not an attainable goal for many in the city.

The planned projects are years, if not decades, away from completion. In the meantime, rents continue to rise, businesses continue to struggle to find and house workers, the population continues to age, and the viability of northern New England’s playground is coming into question.

So, how did we get here?

“Folks were worried about New Hampshire turning into one big city,” reflected Carmen Lorentz, executive director of Lakes Region Community Developers, a nonprofit that builds affordable housing developments. “The zoning we have today is a function of that. I think the unintended side effect has made the housing unaffordable.”

Planning Director Dean Trefethen explained that most zoning was initially conceived in 1940s and 1950s, albeit with much different requirements and setbacks than today.

“Let’s say someone buys a 10-acre piece of land, punches a road down the middle, the expectation is these lots are going to be a certain size and you’ll be able to build on it with appropriate setbacks,” Trefethen said. “That works great for new subdivisions. It worked great for the ’60s, the ’70s and a little bit into the ’80s.”

But something changed in that final decade.

“I’m a baby boomer,” Trefethen explained. “We just went through a period where cities and towns struggled to keep up with school-age children.”

After World War II, the country saw its largest population explosion at that time. According to the Population Reference Bureau, there were 76 million births from 1946 to 1964. Such a population explosion would not be seen again in the U.S. until the arrival of millennials in 1981. When baby boomers such as Trefethen started to have their own children, there was a palpable fear that institutions would be simply overrun.

“Schools are a very significant part of any municipality’s budget. It’s 60 percent of Laconia’s budget, 75 percent to 80 percent in smaller towns,” Trefethen explained. “Zoning evolved a bit into the ’80s. Instead of allowing a quarter acre, let’s make it a half-acre, or one acre” for a home.

Smaller communities outside Laconia have even larger acreage requirements for single-family homes. According to Trefethen, Sanbornton requires three acres for a new lot. Higher lot prices and land size requirements limit who is capable of living in the region.

Zoning has long controlled the socioeconomic destiny for millions of Americans. For decades, a practice known as redlining famously prevented African-American families from purchasing properties in predominantly white suburbs. As a result, minorities and lower-income people were increasingly pushed into less desirable and even environmentally hazardous neighborhoods.

“The end result was that young families and middle- to low-income families did get priced out of the market,” Trefethen said of the region’s choice to expand lot sizes. “That is what happened. But I don’t think that was the original intention. That was a byproduct and we lived with that situation collectively for a number of years to a point where we are today.”

The fear of young families burdening local school systems with more children is still seen in zoning board and community meetings. For many, more children in school means more taxes, so new multi-family developments, especially in smaller communities, often meet staunch opposition. But this fear of more children and more taxes may be missing the mark.

“Multifamily housing does not generate the number of school-age children that people think it generates,” Trefethen said. “My parents had four kids in the school system. The average house today generates around 0.75 students.”

“There is that misnomer that every time a family moves in it will cost you more taxes,” said Evelyn Whelton, senior vice president and retail sales manager for Bank of New Hampshire. Whelton has nearly three decades of experience in the industry. In that time, she’s gained a deep insight into the Granite State’s housing market.

“What people don’t understand is most of our towns in New Hampshire have a dedicated infrastructure to education,” Whelton said, citing changes over the last 15 years. “As our towns age and the younger population decreases and fewer children go to the schools, you now have fewer children utilizing infrastructure, but you still have to pay the same price or more to maintain the infrastructure, so your cost per student goes up.”

The source of this misconception among older generations may be simply based on their own experience growing up.

“I think people think about those days gone by, every yard was full of toys, had a swing set, there were kids everywhere,” Trefethen said. “In this day and age, if you go up and down the streets and count the number of school-age children, it’s not as much as people think it is. They may have other children, but they’re not necessarily school-aged.”

New Hampshire is also the second oldest state in the country, with an average age of 43, trailing just behind Maine’s average of 44.8 years old. Laconia schools had seen a small but relatively steady decrease in student population until this year. This meant fewer and fewer young people would be around to directly and indirectly support the state’s growing number of seniors.

“So theoretically, does it cost less money simply because you have fewer children?” Whelton questioned. “I would argue that it doesn’t. You want a good balance and mix of different age groups.”

Reaching such a balance is easier said than done, especially when it comes to young people entering the region who are looking for starter, not luxury, homes.

According to the 30 percent rule for rent, a single person could only afford a rental rate of $755.62, well below $1,350 average for a one-bedroom apartment in the city.

“We have a lot of vacant housing that is used seasonally or for short-term rentals,” Lorentz said, citing the appeal of high rental revenues from vacation rentals or short-term leases. Curbing this practice is easier said than done. “I don’t think there’s much appetite to force people to do something with their property they don’t want to do.”

Developers and investors also have been buying up housing units, only to tear them down and replace them with higher-priced dwellings or commercial space.

One such example is the Lakeport area, where several multifamily properties have been purchased and torn down to make way for newer, pricier ventures.

In the last two years, two apartment buildings have been bought and torn down, further decreasing the area’s housing supply. It is unclear what will replace them, or how affordable they will be.

As rents go up, home ownership is also an increasingly difficult goal to achieve for working people. Families earning $150,000 or less are considered “low- to medium-income” families, and may qualify for loan programs to buy houses, according to Whelton.

“The bigger challenge is finding inventory or housing that fits in that $300,000 range, and I’ll stretch it as high as $350,000,” Whelton said. “We do look at household income for some of these programs. Inventory remains the greatest challenge to home ownership in the Lakes Region and the state as whole.”

“In Laconia in particular, we have not created enough apartment units, duplexes and small houses to accommodate the younger generation or people that maybe want to downsize,” Trefethen said. “As everyone knows, we have no problem building luxury homes on the lake.”

Construction costs have increased significantly since the pandemic. Combine that with the city’s costly logistical barriers to new housing, and the choice is easy for builders.

“It’s easier to build a $2 million home and work with one client to build that one home on their lot. That’s a one-year job. That’s a much more palatable solution than fussing with the infrastructure requirement issues and going to a planning board six times for approval,” Whelton explained. “It’s going to come down to cost and their ability to bring the highest yield in to feed their families.”

Once outside of the city center, developers are responsible for the cost to expand sewer and water lines to new projects, making the initial building costs for multi-unit developments cost-prohibitive. That’s even if they can find affordable land to build on in the first place.

“In order for someone to do a new development, someone’s got to be willing to sell the land and that has not necessarily been the case recently, and when they do sell it, it’s very expensive to buy,” Trefethen said. “That translates to a higher price for whatever gets built on there.”

“Infrastructure costs over the last 15 years have been very expensive,” Whelton said. “If you’re putting in a development and the city of Laconia says your road has to meet particular standard, the higher the standard, the higher the cost. Now you’ve invested half a million dollars before you’ve even started putting up a house. It’s lot of cost and investment for a developer before they put a shovel in the ground.”

Organizations like Lakes Region Community Developers have gone to work on a variety of low- to middle-income housing projects. However, these developments are often met with hostility from members of the public who see them as little more than subsidized “projects” that lower adjacent property values.

“I think that attitude is still pretty prevalent throughout the region, unfortunately,” Lorentz said. “What I try to explain to people is that we need housing for essential workers and seniors who are on fixed incomes.”

“We have to provide places for people who work in food service, health care, and in hospitality. They don’t make a lot of money. If our communities are going to work, we need to have diversity of housing so all those people can live here.”

Hospitality is arguably the lifeblood of the Lakes Region. According to a study commissioned by the Lake Winnipesaukee Association, tourism associated with the lake was worth $294.1 million. Despite these numbers, the workers that sustain the industry increasingly struggle to afford to call the Lakes Region home.

“If you talk to any business in the area, they’ll tell you they don’t have enough people to run their business the way they want to run them. A big part of that is housing because people can’t afford to live here,” Lorentz said. “I don’t know that people make the connection between being annoyed they have to wait eight hours when they go to the ER or two hours to get into the restaurant.”

There may be lights at the end of the tunnel in the form of new housing projects, such as a proposed, 1,300-unit mixed housing and commercial development on the site of the former Laconia State School, but such projects are years away from completion.

“From historical terms, it’s taken us 15 years to get into this mess, and it’s probably going to take the same time to get out,” Lorentz said.

So what, if anything can be done in the meantime?

“That’s the million-dollar question,” Lorentz said. “I don’t think there is an answer to that. That’s why we’re struggling with this.”