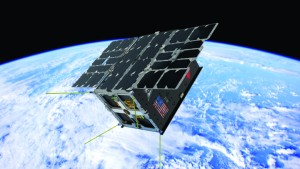 A Laconia company is hoping to fill a vacuum and is willing to send a satellite – you might think of it as a Roomba for low-earth orbit – into space to do it. If their plans pan out, the owners of Rogue Space Systems expect their venture might make space a little tidier and, by extension, a safer place to operate.

One of the two worst days in the history of space exploration occurred on Feb. 1, 2003, when the Space Shuttle Columbia broke apart as it re-entered the Earth’s atmosphere, killing all seven astronauts aboard and grounding the Space Shuttle program.

Investigators determined that the disaster was caused by a piece of foam that broke off one of the fuel tanks during launch. The foam, which can be seen on a video recording, strikes one of the shuttle’s wings, and likely caused a hole in the ceramic heat shield on the exterior of the wing. That damage allowed heat caused by the re-entry to penetrate into the wing, destroying the internal structure of the wing and causing the rest of the vehicle to disintegrate in the skies over Texas.

In the years since, damage from debris has only increased, as small particles left behind in low-Earth orbit number in the hundreds of thousands, if not millions. One article published on NASA’s Headquarters Library website notes that there’s more than 6,000 pounds of debris in orbit around the Earth, and each of those pieces is traveling at more than 17,000 miles per hour.

On Union Avenue, in an old mill building across the Winnipesaukee River from downtown, a small start-up is aiming to create and operate satellites that make space safer for other satellites. Rogue Space Systems is less than a year old, but it already has the attention of NASA and the Air Force’s Research Laboratory.

The company was founded by Jeromy Grimmett, who left the information technology world to step into what he sees as the biggest business opportunity that is being completely unserved.

Grimmett is a Louisiana native who worked on missile guidance systems for the U.S. Army. He moved to Alton to take an IT job based in Kittery, Maine, then in 2018 decided to go back to school so he could find a new career path.

He never finished his degree, though, because he attended a space conference at the Massachusetts Institute of Technology on March 15, 2019. He traces the beginning of Rogue to the moment that conference ended.

“I left the MIT space conference, called my partner and said, ‘I’m starting a space company.’”

In less than the span of a lifetime, human civilization has become deeply dependent on satellites, and that dependency only grows with each rocket launch. Grimmett said there are more than a trillion dollars worth of assets in orbit at any given time, and no one offering to take care of them.

“There’s nobody providing the services Rogue does,” Grimmett said.

Rogue Space Systems is designing orbital robots – “orbots,” they call them – as well as an artificial intelligence system they will use to approach satellites. The orbots – which can also be controlled by engineers on Earth – can provide close-up visual inspection and can “listen” to the internal operations of the satellite. The orbots will be able to provide maintenance and repairs without taking them out of service.

Grimmett said that, in the case of the Columbia, one of his orbots could have been dispatched to inspect the shuttle’s exterior prior to its re-entry into the atmosphere – and therefore could have saved the lives of those astronauts.

Rogue’s orbots are also being designed to address the plague of space debris. Rogue engineers are designing the orbots to be able to encounter space debris, caused by accidental or intentional destruction of satellites, and use a laser to change their mass. That state change would cause the particle, which could be smaller than one millimeter, to fall out of orbit and burn up in the atmosphere. Grimmett envisions a fleet of his orbots flying in formation ahead of particularly valuable assets, such as the International Space Station, and sweeping a path through its orbit.

It might sound like science fiction, but Grimmett and his team are serious about bringing their idea into reality, and they’ve attracted some powerful believers.

“When you’re doing something like this, first, everyone’s skeptical,” Grimmett said. Among his first believers was another space entrepreneur, someone whose business was already successful. That contact said he could see about getting Rogue a meeting with NASA scientists who, if they thought the project could work, would be willing to give a prototype a ride into orbit on one of their rockets. Sure, said Grimmett.

Some time went by, and then one Sunday afternoon he got an email. NASA would meet with them that Thursday, June 4. He was told he would be meeting with a team from NASA, who would pepper them with questions and look for holes in their plan – they didn’t want to waste a spot on the rocket on something that wasn’t ready for prime time.

It was a make-or-break moment, and Grimmett and his team had less than 100 hours to prepare.

“I was nervous as hell. I was scared out of my mind. I was talking to heroes, people who are doing what you dream of doing,” Grimmett said. To top it all off, their internet connection was flaking out the morning of the meeting, so he called in a favor and moved his whole team to the Huot Technical Center, “and it went off without a hitch,” he said.

The team from NASA liked what they heard and gave him a verbal OK. Shortly afterward, though, he was contacted by another space-minded governmental body, the Air Force.

At the end of February, Rogue announced the signing of a three-year Cooperative Research and Development Agreement with the Air Force Research Laboratory. The agreement means the Air Force and Rogue will work together on testing and development in areas where Rogue’s interests overlap with the Air Force’s mission. It also means that the Air Force will be the one to give a Rogue orbot its first ride into space. Grimmett said he and his team are working toward a launch sometime in 2022.

Rogue currently has about 20 employees, a mix of full-time and part-time, some of whom are working on salary but most of whom are laboring in exchange for equity in the company. Grimmett said he expects to have about 25 workers, almost exclusively engineers, when fully staffed.

Rogue is currently in fundraising mode. Rather than chase venture capitalists, Grimmett is hoping to raise $5.5-million through the crowdfunding site TruCrowd.

It might be unconventional, but that is how Grimmett got to the point where he is today.

“We break the rules,” he said, explaining the name he gave his company. While other satellites are made to last for years, Rogues are disposable by design. They are built to get as much done as they can with the fuel they carry, reserving the last bit of energy in its tank to shove it out of orbit to be burned up by the atmosphere.

“The way that we solve problems and develop solutions is not the same way that traditional space and engineering firms do. There’s a lot of chaos engineering,” Grimmett said.