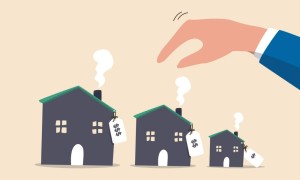 Buying and keeping a home in Rockingham County will cost you more than half of your annual income, according to a new analysis of real estate sales data from the second quarter of 2022.

In order to afford purchasing a single-family home or condominium in the county, owners would have to spend 50.6 percent of their income, based on annual earnings of $65,884, said ATTOM, a curator of real estate data from across the U.S.

ATTOM’s U.S. Home Affordability Report, released June 30, shows that median-priced single-family homes and condos were less affordable in the second quarter of 2022 compared to historical averages in 97 percent of counties across the nation with enough data to analyze. That was up from 69 percent of counties that were less affordable in the same quarter of 2021. It is also the highest rate of affordability since 2007, just before the housing market crashed during the Great Recession of the late 2000s.

Those four counties (of 10 in New Hampshire) are in ATTOM’s red zone map.

ATTOM used an affordability index that measures an average person’s ability to purchase a home in a particular region, based on housing prices and income. An index number of 100 indicates a buyer with the area’s median income has exactly enough to qualify for a mortgage on a median-priced home, and lower the number below 100, the less affordable a median-priced home is.

In New Hampshire, the four counties measured all had a very low affordability index in the second quarter: Rockingham, Strafford and Merrimack counties had an index of 72, while Hillsborough’s index was 75.

To put the numbers in perspective, Suffolk County in Massachusetts – which includes Boston – had affordability index of 80.

The report determined affordability for average wage earners by calculating the amount of income needed to meet major monthly home ownership expenses — including mortgage, property taxes and insurance — on a median-priced single-family home, assuming a 20 percent down payment and a 28 percent maximum “front-end” debt-to-income ratio. That required income was then compared to annualized average weekly wage data from the U.S. Bureau of Labor Statistics.

Rick Sharga, executive vice president of market intelligence at ATTOM, said that in recent years, the very tight supply of homes caused home prices to soar, “but homes remained relatively affordable due to historically low mortgage rates and rising wages. With interest rates almost doubling, homebuyers are faced with monthly mortgage payments that are between 40 and 50 percent higher than they were a year ago – payments that many prospective buyers simply can’t afford.”

Rising mortgage interest rates combined with inflation — and fear of a recession — are starting to shift the market.

“Worsening affordability appears to be having an impact on demand, which could lead to prices plateauing or even correcting modestly in some markets,” Sharga said. ”Many potential buyers may elect to continue renting until market conditions improve. Others might adjust their sights and look for smaller properties, or homes that are further away from major metro areas. And it’s possible that worsening affordability could accelerate the migratory trends that the COVID-19 pandemic started, as residents in high cost, high tax states who can now work from home look for less expensive places to live.”

New Hampshire has been a land rush of opportunity in recent years. While it was hot pre-Covid, it was red hot during the pandemic as urbanites sought more suburban and rural areas in the Granite State.

The state’s most recent data in May from the New Hampshire Association of Realtors shows that, while the total volume of sales might be declining, the median prices of houses and condos is still climbing.

Meanwhile, according to the Realtors, the affordability index sunk to an historic low of 73.

“The median income in New Hampshire is now only 73 percent of what is needed to qualify for the median-priced home under prevailing interest rates. By contrast, that number has been over 200 percent as recently as February 2018,” the NHAR said.

The median price of a condo was also at an all-time high in May — $350,000. The affordability index, however, was much better for a condo versus a house. It stood at 96 in May, according to the NHAR data.

According to the ATTOM report, affording a home across the nation has gotten significantly tougher in recent months at a time when the U.S. housing market has surged for the 11th straight year but also faces notable headwinds that could slow it down. One major force remains: home prices have continued to soar in 2022 as a large cohort of homebuyers continues chasing an extremely small supply of properties for sale. Elevated demand has helped push the national median home price up over the past year at more than double the pace of wage growth.