Amid rising interest rates, agency sees ‘market at a crossroads’ 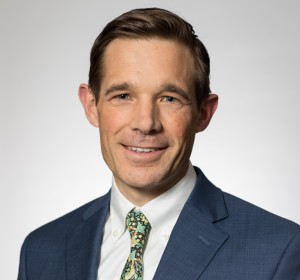 ‘For decades, the production of new housing has failed to keep pace with demand in our state,’ writes NH Housing Executive Director Rob Dapice in his introduction to the agency’s annual Housing Market Report.

“The market is at a crossroads,” said Executive Director Rob Dapice. He explained that by raising interest rates the Federal Reserve has sought to cool the overheated housing market by dampening demand, but at the same has increased the cost of home ownership beyond the means of more and more households.

Introducing the report, Dapice notes, “For decades, the production of new housing has failed to keep pace with demand in our state. It would take at least 20,000 housing units to achieve a balanced market, meaning a 5% rental vacancy rate (New Hampshire’s hovers at 1 percent) and a six-month supply of homes for sale (currently less than one month). The most obvious solution to our state’s housing challenges,” he continues “is to build more homes and remove excessive zoning obstacles that hinder this from happening.”

Meanwhile, data presented by the NH Housing report and echoed by the NH Association of Realtors, indicates that lack of sufficient inventory, both existing homes listed for sale and new units under construction, continues to sustain record high housing prices, which have been augmented by rising financing and construction costs. 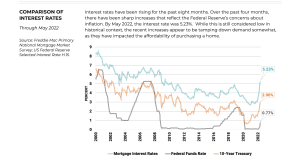 According to the Freddie Mac Primary Mortgage Market National Survey, interest rates on a 30-year fixed rate mortgage jumped from 3.1 percent at the end of 2021 to 5.23 percent by May 2022. In New Hampshire, this represents nearly a 30 percent increase in the monthly principal and interest payment on a home priced at  $400,000 with a 5 percent down payment, excluding taxes and insurance, from $1,623 to $2,093. Rates rose to 5.5 percent in June, increasing that monthly payment to $2,158.

The housing affordability index, calculated by the NHAR, measures whether a median household earns enough to qualify for a 30-year fixed rate mortgage to purchase a median priced single-family home, assuming a down payment of 20 percent, without paying more than 25 percent in principal and interest. An index of 100 or more indicates sufficient income to qualify. Since 2005, when the index was introduced, it has seldom dipped below 150 and in 2013 neared 300. In May, when the median sale price of single family homes kept to $460,000, the index fell to 73.

The NH Housing report also presents data indicating that those earning the median wage in a number of essential trades and professions find themselves far short of the means to purchase a median-priced home. 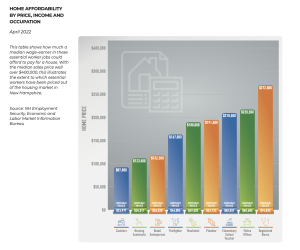 For instance, a firefighter and a machinist earning median wages of $46,004 and $49,502, respectively, could afford to pay $167,000 and $180,000 for a home – less than half the median price. And if they shared a household with an elementary school teacher earning the median wage of $60,057, their combined incomes would not be sufficient to afford a median priced home.

Data drawn from the Home Mortgage Disclosure Act shows that the share of loans used to purchase second homes increased in all 10 counties of New Hampshire between 2018 and 2020. Mortgages for second homes represented 45 percent of all loans in Carroll County, 33 percent in Grafton County, 29 percent in Coos County and 28 percent in Belknap County. The Economic Policy Institute reports that 90 percent of non-primary residential units are owned by the wealthiest fifth of American households.

An indeterminate share of these second purchases were made by homebuyers from other states, more than half of them from Massachusetts. Altogether, they accounted for a quarter of all sales from 2016 to 2019 before rising to 28.5 percent in 2020, 31.6 percent in 2021 and 28.8 percent in the first five months of 2022.

NH Housing will issue its 2022 Rental Cost Survey next month.