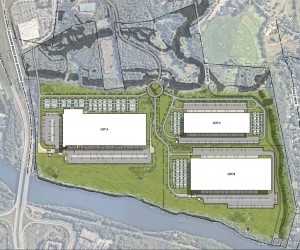 The Hudson Planning Board has given its conditional OK to the controversial Hudson Logistics Center project, a 2.6 million-square-foot campus, most of which will be home to a major Amazon distribution center.

It’s the latest step in the effort to build the three-building warehouse and distribution project on the site of the former Green Meadow Golf Course. The project next heads to the town zoning board.

The logistics center’s developer, Hillwood Enterprises, has named Amazon as the primary tenant of the two larger buildings. The third building won’t be approved until after the first two buildings are open and a study of traffic patterns is conducted.

According to Hillwood, the project will generate up to $4.8 million in net tax revenue, while creating 1,400 direct jobs paying $15 to $17 an hour; it also will generate another 900 indirect jobs.

But opponents who joined together almost immediately after plans were revealed last year, say they haven’t given up the fight.

Amy Manzelli, an attorney with BCM Environmental and Land Law, which represents more than 50 residents opposed to the project, told the NH Union Leader they may decide to appeal the decision, which is next headed for the Hudson Zoning Board of Adjustment. They have 30 days to file an appeal.

Opponents have already filed a lawsuit against the town, alleging right-to-know violations related to information about the project.