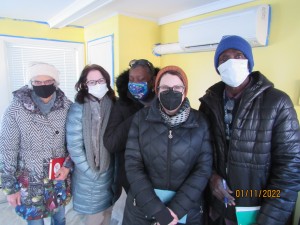 From approximately 2 a.m. to 6 a.m. on Jan. 27, first responders, advocates for the homeless, human service workers and volunteers will undertake the annual count of homeless people in New Hampshire.

“Federal HUD dollars are allocated according to this point-in-time snapshot of the homeless population,” Manchester’s Homeless Initiatives Director Schonna Green explained at the most recent HOPE (Housing Options Promote Empowerment) Outreach Committee meeting at 587 Maple St. in Manchester. The address, the site of Rootz Natural Hair Shop, will soon host a donation center geared toward the housewares individuals need in making the transition from the streets to more secure housing.

Green addressed both what is working in helping homeless people during this critical time of year and what the network-building of HOPE and its allies seeks to accomplish.

She praised the Manchester Fire Department for its outreach to those in need of physical safety in cold temperatures and pointed out that Families in Transition has 138 beds available daily, with requests for shelter running at about 125-132 nightly.

Manchester Alderman-at-Large June Trisciani noted that the warming station at Union Street’s Café 1269, which provides a place out of the cold for approximately 50 people during the day, has not turned anyone away to this point.

“As critical issues arise, we will address them,” Green told committee attendees. “There is a critical need for the expertise of clinicians and for added staff to ensure safety. This is where funds are needed now.”

“We have affordable shelter coming down the road,” Trisciani said. “We’re in a better position than we’ve ever been in, but it will take time.”

“We need permanent supportive housing,” Green added. It is hoped that funds can be raised to provide a second warming station by next winter. Public spaces not designed to fill this need, such as the Manchester City Library, currently provide a place out of the cold. Some $136,000 was needed to ensure the 1269 Café site met Manchester fire codes.

Others see the affordable housing crisis as directly affecting their stability even as they work and volunteer within New Hampshire communities. Briefly looking at three of those populations who might not be thought of as being affected by housing insecurity and the lack of affordable housing might help explain why the housing crisis leaves many on the outside looking in. These three groups are those with intellectual or developmental disabilities (ID/DD), those with traumatic brain injury (TBI) and abuse survivors attempting to flee their abusers.

According to an ABLE NH survey of 300 people with disabilities and their caretakers, 68 percent of family caretakers stated their loved one is presently at risk of homelessness. This finding makes sense when noting that 60 percent of caretakers reporting their age as between 55 and 74.

Many people with ID/DD are thus currently limited to living with family members who obviously won’t be around forever. According to the survey, more than 50 percent of people in the ID/DD population would like to live independently with appropriate assistance and supportive housing.

New Hampshire Council on Developmental Disabilities member Forrest Boudoin-Friede told the audience, “Living on my own is important to me. It’s a matter of dignity … Tell me: What other class of protected citizens are expected to live their whole lives with their parents?”

The New Hampshire Coalition to End Homelessness (NHCEH) composed a 2020 State of Homeless in New Hampshire report after that year’s Point-in-Time count. The nonprofit has branches throughout the State.

Therese Siebert, NHCEH’s board chair and a sociology professor at Keene State College who teaches a course “Homelessness in New Hampshire and the USA,” introduced the report, put together under the leadership of Cathy Kuhn, NHCEH director from 2012 to 2020.

The report noted an overall 21 percent increase over the previous year in the homeless population to 4,451 individuals. This follows national statistics. The study opined that the number of homeless family members, 1,577, is likely vastly underreported. Couch-surfing and bouncing to different relatives every few months for shelter is not technically homelessness, and like ABLE NH’s population, this housing-insecure population is often one kind family member or friend away from homelessness.

NHCEH also found that people of color are three to four times more likely to experience housing insecurity, that 60 percent of New Hampshire’s homeless citizens live outside Manchester, and a 112 percent increase in the number of chronically homeless people in New Hampshire over the previous year.

“People that are homeless have significant histories of trauma,” the study noted.

A 2020 article in Neurology Today titled “Traumatic Brain Injury in Homeless People is Underrecognized” said 53.1 percent of people experiencing homelessness or marginal housing and the violence that can go with it suffer from TBI. Drawing on 18 studies of 9,702 individuals in six countries, including the United States and Canada, first detailed in Lancet Public Health in December, 2019, found that one-quarter of homeless adult men struggled with illiteracy.

There is the double-whammy, the article explained, of TBI leading to the downward slope of housing insecurity, and the greater risk of TBI while unhoused. TBI leads directly to mental confusion, outbursts of anger, depression and clouding of the senses.

The Veterans Administration, and veterans are overrepresented in the homeless population, heads its online section on TBI: “Motor vehicle crashes. Explosions. Falls.” The Department of Defense found 375,000 cases of TBI across all service branches from 2000-2017.

As Green has noted, the chronically unhoused population is dealing with multiple layers of disability, whether it be mental illness, addiction, domestic violence or TBI.

‘Support from all angles’

According to the website stopchildhomeless.org, 83 percent of homeless youth experienced violence by the age of 12, with LGBTQ youth at greatest risk. “The problem is bigger than you know,” the site says. “The victims are smaller than you think.”

“I’ve learned that the high incidence of TBI in marginalized populations is true since the mid-‘90s because of my work as an advocate and consultant on mental health issues,” Skinner said. “Physical and emotional abuse impact mental health.”

Those fleeing continued abuse at a young age are another group overrepresented in the homeless population.

“During high school, I couch-surfed and spent an entire winter living in a pickup camper top,” Skinner continued. “My lived experience as a survivor of physical, emotional and sexual abuse has given me a new perspective on what is termed mental illness. People need hope, a path to wellness. A diagnosis is not a destiny.”

“My role is to call in support from all angles,” Green said at the most recent HOPE Outreach Committee meeting.

To that end, the HOPE Housing and Homeless Fund has been set up. The flex fund could contribute to the Manchester’s Affordable Housing Trust but would also fund additional needs, such as a second warming station. Donations can be made to the Hope Housing and Homeless Fund, 100 Merrimack St., Manchester 03101. Business partners and donations of land and housing are also being sought by Green.