‘There’s a lot of weariness around this’ 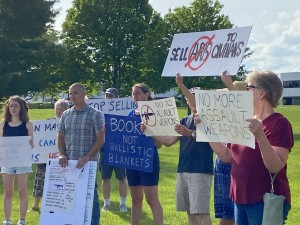 Protesters send call for an end to assault-style weapons outside the headquarters of firearms manufacturer Sig Sauer at Pease International Tradeport in Newington on Friday, May 27. (Rhianwen Watkins-Granite State News Collaborative)

Loren Selig felt compelled to join a protest Friday outside the Sig Sauer firearms headquarters in Newington following the killing of 19 children and two teachers at an Uvalde, Texas, elementary school this week.

Protesters called for an end to manufacturing assault-style weapons and for legislation to require background checks and other measures.

“I am heartbroken. I am so disappointed in the legislators who have blocked smart gun control laws,” Selig said. “They’re not doing what’s best for our children who are truly our future and not the guns.”

The protest, organized by church pastor Dave Grishaw-Jones, attracted members of Grishaw-Jones’s church and others in the faith community, as well as teachers and students.

Selig, a member of Oyster River Parents for Gun Control group and a former teacher in Maryland, is planning to run for state representative in 2022.

“One of the actions that I am recommitted to is that I am running for office, so that I can push for gun control laws myself,” Selig said.

According to Selig, gun legislation she will be pushing for will include mandatory background checks and waiting periods for gun buyers, as well as requiring gun owners to be licensed and have their licenses renewed in-person periodically in order to have their mental health evaluated. Selig also emphasized the need for red flag laws.

“We need to make sure that people like the shooter at the elementary school the other day, don’t have the ability to go out and buy two assault rifles two days apart,” Selig said.

Grishaw-Jones said protesting in front of Sig Sauer was important because it manufactures guns and because the perpetrator of the Orlando, Florida, shooting of LGBTQ+ community members at a nightclub in 2016 used a Sig Sauer MCX Rifle. Fifty people were killed and 53 wounded.

“There’s a lot of weariness around this, a lot of anger and a lot of despair even, that nothing’s changing,” Grishaw-Jones said. He added that in the past, the church has held candlelight vigils after mass shootings. However, he said, this time the group wanted to be more demonstrative.

“I think about my kids a lot when it comes to things like this,” Grishaw-Jones said. “I want them to know I’m not sitting still.”

“Being a teacher, you know, the shooting in Texas last week hits pretty close to home,” Bromley said.

“You have to practice for these hypotheticals that aren’t actually so hypothetical,” he added, referring to schools being equipped with bulletproof glass and requiring regular lockdown drills. “It’s very troubling when you have to go through those drills, and you’re looking at kids and not knowing how to process it.”

Samantha Piatt, spokesperson for Sig Sauer, answered a phone call Friday with a request to comment for this story. Hours later, she had not provided a comment.