Facing the challenges of teaching in New Hampshire during a pandemic

We need our elected officials to fight for students and educators 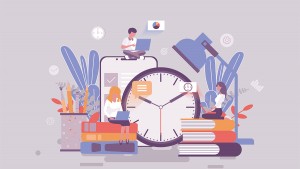 The end of the school year is always consumed with bittersweet farewells. For us teachers, it’s also a moment of pride and reflection. This year, it feels different than ever before.

Like so many Granite Staters, over the past few months, our lives and our work have transformed due to coronavirus. We abruptly transitioned our profession online, trading in classroom discussions for the less personal thrum of e-learning. None of us expected a challenge like this, but my colleagues and I worked hard to make it work, pouring in late nights and long weekends to provide our students with some semblance of normalcy. We adapted lesson plans, moved our curriculums online, and implemented creative ways to engage them. And we fought through technical difficulties, learning on the fly, knowing that our public schools play such an important role in the lives of every student.

The challenges we faced were immense. As we made these changes, it became clear that many of our students faced added difficulties with distance learning. Some had unstable internet or faulty devices or none at all. Others did not have a quiet place to join class from, or to work. And ultimately, it is impossible to replicate in-person, hands-on instruction on Zoom or any other e-learning portal.

As a former Dover High School teacher, U.S. Sen. Jeanne Shaheen uniquely understands these challenges. That’s why she worked across the aisle to ensure that New Hampshire schools received federal support as we transitioned online during the pandemic. Originally, Senate Majority Leader Mitch McConnell proposed a Covid-19 response that allocated zero dollars for emergency education funding. That would have left us out to dry.

Fortunately, Senator Shaheen knew that we were in crisis. She demanded a better deal for Granite State students and teachers, securing nearly $85 million in emergency education funding in the CARES Act. This money was crucial in improving existing technology and supporting our most vulnerable students.

Unfortunately, both Republicans running against her opposed her efforts, publicly condemning her for voting against McConnell’s proposal that included zero dollars to help public schools transition to e-learning during the pandemic. While Shaheen was busy fighting for emergency education funding, Corky Messner attacked her for advocating for Granite State students, saying she should have supported the inadequate Republican proposal instead. Messner’s primary opponent, Don Bolduc, agreed. Had Messner or Bolduc been in the Senate, they would have fought to ensure New Hampshire would not receive any emergency education funding during the pandemic.

Throughout her career, Senator Shaheen has worked with Democrats and Republicans to make a difference for New Hampshire students. As governor, she expanded kindergarten access to tens of thousands of children. In the Senate, she has passed legislation that strengthened job training and STEM education and expanded federal support for early childhood education.

That’s quite a contrast from her opponents.

At a recent event, Corky Messner suggested that the Department of Education doesn’t do anything worthwhile. His opponent, Don Bolduc, has proposed that we eliminate DOE entirely. This is the department charged with supporting special education programs, protections for civil rights. If Messner and Bolduc were to succeed in eliminating it, it would cost New Hampshire hundreds of millions of federal dollars every year, make it harder to help students facing learning challenges or discrimination, and cause irreparable harm to our state’s public schools and economy.

It is still too early to know what the fall will look like and what new challenges await us. But I know that teachers across the country will do everything we can to support our students, and we need our elected officials to fight for us too. Senator Shaheen has made a difference for us during a really tough time, and I know she will continue to fight for us no matter what.

Kevin Fleming of Exeter is a teacher at Winnacunnet High School in Hampton.

Opening hearing is Friday in challenge to NH's school-funding scheme