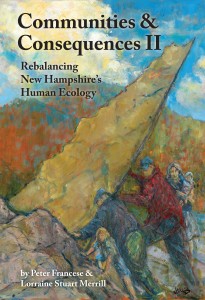 Like detectives, New Hampshire authors Peter Francese and Lorraine Stuart Merrill and documentary filmmaker Jay Childs are back on the case.

In 2008, the book and accompanying film, “Communities & Consequences: The Unbalancing of New Hampshire’s Human Ecology and What We Can Do About It,” was a frontal demographic assault on cherished myths and specific tax and housing policies that drove New Hampshire’s aging population growth — while threatening the state’s long-term economic viability.

Their premises were controversial in part because they took the veil off tax and development policies that made living in New Hampshire much easier for folks over 65 and harder for young people trying to raise families and find affordable housing.

What was once controversial has now become conventional wisdom: The workforce housing shortage issue is front and center as a major economic dilemma in the state. In 2020, the trio has returned with “Communities & Consequences II: Rebalancing New Hampshire’s Human Ecology,” a book, ongoing film project for New Hampshire PBS, and a community outreach program designed to assess and share organic community solutions to a vexing policy labyrinth. 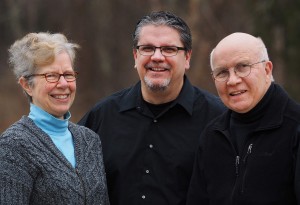 From left, Lorraine Stuart Merrill, Jay Childs and Peter Francese have teamed up to produce a sequel book and documentary, ‘Communities & Consequences: The Unbalancing of New Hampshire’s Human Ecology and What We Can Do About It.’
(Seacoastonline photo by Rick Beauchesne)

“The only truly affordable housing in the state is if you’re 55 or older and have no children,” said Francese, an Exeter resident and demographic trends expert who in 1979 founded American Demographics magazine.

Over the past three decades, Francese has watched New Hampshire evolve from a relatively young state (28th in median age, 38.2 years, in 1990) to second-oldest state in the country (43, behind only Maine’s 44.9).

“We have a totally skewed demographic with double-digit more percentage of senior population than school-age children,” he said. The number is 22% — there are over a fifth more Granite Staters over 65 than children aged 5 to 17.

“These issues have only accelerated and become more acute. The state put itself in this box and we are seeing the unintended consequences of these policy decisions,” said Stuart Merrill, a former commissioner of the state Department of Agriculture, Markets and Food.

“Interestingly, the policies driving demographic imbalance create these workforce and affordable housing challenges we see across the state,” added Childs. Even after the economy recovers after the pandemic in the next couple of years, Childs said, “we might be right back in the same place.”

One myth that was successful in creating a generational wedge was that a flow of young families and school-age children in town would lead to property tax increases. Francese said the reality is far different as school costs did not go down despite a declining school-age population.

He said he is encouraged that the myth about more schoolchildren leading to higher taxes “is being talked about less.”

“It’s time we look at children as a resource and future taxpayer, not a burden,” said Stuart Merrill.

That myth of budget-busting youngsters was irrelevant in Kevin Smith’s town.

Smith is the town manager of Londonderry, one of the New Hampshire towns highlighted in the book that has created friendlier workforce housing policies to draw a younger working population and address its demographic imbalance.

“The fear never materialized. We didn’t have an explosion of school-age children,” Smith said after the town became home to more than 200 affordable apartment units at three development sites during the past five years. Following a first attempt in 2010 to encourage workforce housing development, the town went back and streamlined the approval process to make it easier for developers.

But it isn’t easy making changes in part due to policy choices that have been in place for years. “Town after town in this state subsidizes old people,” said Francese, who will turn 80 early next year.

According to Francese, seniors get more than $1 billion in property tax abatements, while younger state residents get nothing of the kind. “If you have no property tax, you can basically live here tax-free,” he said.

Furthermore, towns across the state have encouraged an age-restricted housing boom over the past two decades while workforce housing initiatives did not get the same priority from developers.

But. as their new book makes clear, change is happening across New Hampshire in places like Keene, Pelham, Londonderry, Bradford and Lancaster, where new planning and zoning policies, new thinking and a new generation of leaders are asserting themselves — and younger people are choosing to run for elected office to promote a more balanced agenda.

The second book spotlights a young New Hampshire native who has stayed: Sarah Wrightsman, the 30-year-old executive director of the Workforce Housing Coalition of the Greater Seacoast.

“Regardless of how wonderful your community is,” Wrightsman said in a 2019 blog post about millennials and housing, “you will struggle to attract young people if they can’t find a place to live. Make it possible for the next generation to choose your town.”

“These leaders are showing how to do it differently,” Francese said. “If you want to change, here’s how to do it. If you show good examples, you show how communities benefit hugely from them and the effect can be incredibly positive. Instead of a NIMBY attitude, you can have a positive message of inclusion for all ages.”

The concerns and initiatives raised in the book are now being echoed by employers, business organizations, lawmakers in Concord and nonprofit organizations, like Stay, Work Play New Hampshire, which seeks to reverse the outmigration of college graduates and young people. Without a younger workforce – and the housing to meet the needs of a younger workforce – New Hampshire faces a slow economic decline as businesses leave or become reluctant to relocate to or expand in the state.

Yet, as Londonderry shows, change is no guarantee.

Smith said while there was some influx of younger workers, it is extremely difficult for younger people to move out of an apartment and buy a single-family home.

“Even with the pandemic, the real estate market is extremely tight and expensive in southern New Hampshire. I’ve seen 30-year-old Colonials going for $500,000. New homes are going for $600,000 or more,” said Smith who has been town manager since 2013.

Monthly workforce housing rents in Londonderry run from $1,200 to $1,600 while market rates go from $2,000 to $2,900 a month, Smith said. Furthermore, there are no ongoing affordable housing developments in Londonderry. Smith believes this is in part due to tax credit incentives not matching the annual bureaucratic effort. “With all the red tape, it’s not an easy process for developers,” he said.

It is unknown what impact Covid-19 will have on these initiatives.

The pandemic has laid bare many of the social and economic fault lines and weaknesses in the country, but one factor has become glaring, Stuart Merrill said.

“The pandemic exposed the state’s workforce shortage, especially in the healthcare field,” she explained. “We found out about all the workers we now call essential, but they need a place to live and raise their families.”