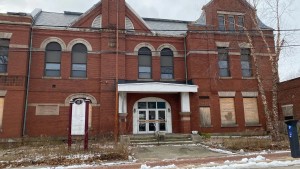 The former Strafford County Courthouse in Dover has been sold to Chinburg Management LLC, which is planning convert it into a mix of residential and commercial units. David Choate of Colliers’ Portsmouth office, represented the seller, One First Dover LLC, and assisted Chinburg in the transaction.

Sale price was $700,000, according to the Strafford County Register of Deeds.

In addition to the redevelopment plan, Chinburg Management is also planning to construct a new building in the nearby parking lot. The project will include 12 units of affordable housing as part of its 60 planned residential units.

Eric Chinburg, president and CEO of Chinburg Properties, said he will be taking advantage of the state’s 79-E program, which provides property tax relief for investments in town centers that involve rehabilitation of under-utilized buildings. He said that by doing so, taxes on the building will remain frozen while the building is being restored.