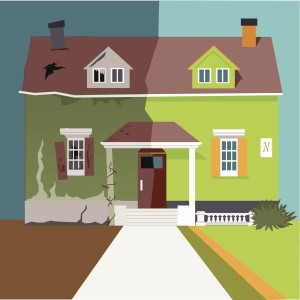 When it comes to flipping houses, New Hampshire shows little interest in that segment of the real estate market. In fact, according to a new report, the Granite State ranks seventh among states with the lowest home-flipping percentage rates.

In simple terms, flipping involves buying a home, usually renovating it, then turning right around and selling it at a higher price, with the hope of selling at a very profitable ROI, or return on investment.

As a percentage of total home sales, New Hampshire’s rate was 5 percent in the second quarter of 2022, according to a new report from national real estate sales data curator ATTOM. In fact, New Hampshire was joined in the group of 10 lowest rates by three other New England states – Connecticut and Maine (tied at No. 5, 4.9 percent) and Vermont at No. 3, 4.5 percent.

Hawaii ranked lowest with a 2.1 percent home-flipping rate for the quarter, according to the ATTOM data.

“I would think that the cost of real estate in most parts of New Hampshire is probably way higher than the national average, making it harder to speculate, especially when you may have already paid 30 percent or much more over ask,” said John Rice, a broker with Tate & Foss Sotheby’s International Realty in Rye. Rice keeps the monthly sales data for the Seacoast Board of Realtors.

New Hampshire recorded 289 home flips during the second quarter (April, May and June) of this year. According to ATTOM’s data, the median purchase price on those properties was $328,705. The median flipped price was $400,000, a gross return on investment of 21.7 percent.

That’s significantly more than the same quarter in 2021, when the gross return on investment was 14.3 percent.

Among New Hampshire’s counties, Rockingham had the greatest number of flipped homes (100, almost a third of the state total), while flipped sales in Cheshire had the highest ROI, 46.5 percent.

Here is the data from other counties in the ATTOM report:

Coos and Sullivan counties were not part of the ATTOM data.

“I am not surprised that Rockingham County has the highest flipping rate, given appreciation rates are likely much higher in Rockingham than in other counties and, therefore, presenting speculators with more of an opportunity – if they can get buy-in at the right price,” Rice added.

Rockingham County has the most expensive homes for sale in the state, with a median asking price of $580,000, according to the August report of the New Hampshire Association of Realtors. The Seacoast area itself recorded a median sales price of $680,999 in August, according to data kept by Rice.

An overall slowdown in the real estate market due to higher interest rates and inflation/recession fears could impact speculators in the future, according to Rice.

“I suspect that rising mortgage rates will throw a wet blanket over this market segment,” he said.

While New Hampshire’s home-flipping numbers were low, the nation as a whole saw 115,198 single-family houses and condominiums in the United States flipped in the second quarter. Those transactions represented 8.2 percent of all home sales in the quarter.

The current home-flipping rate is the third-highest level since 2000, below the high point of 9.7 percent registered in the first quarter of 2022.

“The second quarter was another strong showing for fix-and-flip investors. The total number of properties flipped was the second-highest total we’ve recorded in the past 22 years, and the median sales price of a flipped property – $328,000 – was the highest ever,” said Rick Sharga, executive vice president of market intelligence for ATTOM. “The big question is whether the fix-and-flip market will begin to lose steam as overall home sales have declined dramatically over the past few months, and the cost of financing has virtually doubled over the past year.”

The typical gross profit from a flip, $73,700 in the second quarter of 2022, translated into a 29 percent return on investment compared to the original acquisition price. While that remained down from 33 percent a year earlier – and far below the peak of 53.1 percent in 2016 – the latest margin was up from 25.8 percent in the first quarter of 2022.

“Fix-and-flip activity is mirroring overall housing market trends, with much of the activity, and the highest returns largely coming from the West and Southeast,” Sharga noted. “In fact, even though the highest gross profits came from the most expensive states, 14 of the 18 states where flips accounted for a higher percentage of overall home sales than the national average were in the South, Southeast, and Western states.”