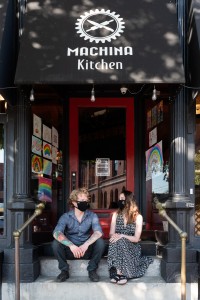 Danya Landis and Jordan Scott, owners of Machina Kitchen and Art Bar, say that collaboration has been essential to surviving the pandemic. (Photo by Kelly Fletcher Photography)

When Danya Landis and her business partners opened Machina Kitchen and Art Bar, a farm-to-table restaurant and artistic space in Keene, they went in aware of the risk they were taking.

“As industries go, the restaurant industry is not an easy one to get into,” Landis said. “It was definitely something that was going to be a learning curve in the first place.”

Despite that, they thought that they could make it work. Landis and her business partner, Rebecca Hamilton, had already been running events in the greater Keene area. When they crossed paths with Jordan Scott, their third active business partner, they saw how they could build a space dedicated to connecting people through art and food.

“Jordan’s point of view on food is to bring people together to collaborate and have an experience through food,” Landis said. “It’s not just the process of eating, it’s the process of connecting.”

In April 2019, the trio opened Machina, changing their business from popup events and catering to a full-time restaurant focused on shared dishes. The team began working to establish the space, with a craft cocktail bar, locally-sourced food and live music multiple nights per week. There were a lot of moving parts, but business was going well.

“We had eight months to figure out how we were going to do everything,” Landis said. “Then, all of a sudden the pandemic hit and we were left empty-handed. It felt like everything disappeared on us. It was a very intense moment of saying what do we do now?”

Landis and Scott grasped for solutions. They immediately pivoted away from shared plates to individual dishes. At one point, they considered opening a bodega and selling bulk-food items, but that idea passed before it could come to fruition. They experimented with a virtual bar, where patrons could come pick up the ingredients for a craft cocktail and join a remote happy hour from home.

Eventually, the restaurant settled into solutions that worked for many Granite State eateries: doing more takeout, offering outdoor dining and creating take-and-bake meals. For a while, that was enough.

But when frigid temperatures shut down outdoor dining, Landis and Scott were concerned about whether their community would be able to support them the same way it had when the pandemic began.

“Last winter, when the pandemic hit, we noticed that our community stepped up in so many ways to be a part of [supporting us],” Landis said. “This winter, people were at first unsure how to approach it. For a little while in the beginning there it was scary. I think we were left thinking, ‘oh gosh, how are we doing to deal with this again?’”

During the stay-at-home order the decision to close the restaurant was clear, but months into the pandemic it was up to Landis and Scott whether to close the doors or try to scrape by.

“It was this gray area,” Landis said.

They decided to reduce their staff from 16 people to eight, but to stay open. Soon, local programs began propping up to support the still-struggling restaurant industry. The Monadnock Restaurant Project raised nearly $30,000 to purchase gift cards for restaurants in the area. The gift cards were distributed to community members, who were encouraged to spend an amount of their own equal to the amount they were given on the card. Efforts like that made a big difference for restaurants like Machina.

“People turned around quickly to see that our industry was struggling, and acknowledged that a little more,” Landis said.

Machina also partnered with Granite Roots Brewing in Troy for a series of fully contactless dinners in outdoor domes at the brewery. The series quickly sold out, benefiting both establishments.

“We’ve had so much partnership during this time,” Landis said.

When they’re not thinking of creative solutions, Landis and Scott are fine-tuning the systems for their business.

“[The pandemic has] given us a little bit of space to really home in our systems and pick apart each piece to make sure they’re efficient and running well,” she said. “We are coming out of this confident and excited.”

Despite the challenges of the past year, Machina Kitchen and Art Bar has survived trial by fire, which makes Landis believe the restaurant will be around for a long time.

“It will never be as challenging as it is now,” she says, “and that gives me a lot of hope.”

This story is part of the 50 Businesses, 50 Solutions series, shared by partners in the Granite State News Collaborative.