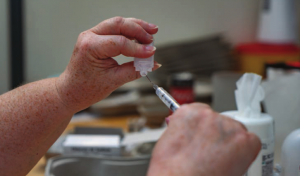 Would you swallow a bill that would prevent you from mandating that your workers get vaccinated? Would you like another bite at Medicaid-reimbursed dental care, downed by a glass of guaranteed fluorinated water?

Starting Jan. 5, before lawmakers can load up hundreds of new bills, they have to pull out and finish off the hundreds left over from last session. For the most part, this amounts to throwing a lot of would-be laws into the trash can, labeled inexpedient to legislate, but there are some 20 bills related to business that will probably pass, and another dozen that might have a chance. These are among them.

The House Republican leadership turned House Bill 255 – strongly supported by the Business & Industry Association – into a bill that would protect have protected employers from Covid-related lawsuits to one that would prevent them – along with political subdivisions, day cares, schools and universities and nonprofits, including hospitals – from requiring that their employees get vaccinated if they object for reasons of “personal conscience” as well as religious or medical reasons. It would be a state mandate forbidding employers from requiring a vaccine, even if they wanted to do so on their own. Unlike the federal mandates, there is no threshold to exempt businesses, so that elderly convenience store owner wouldn’t be able to get rid of their unvaccinated teenage cashier without breaking the law. The education committee recommended passage 11-8, in what promises to be a sneak preview for a slew of anti-vaccination bills next session.

Ironically, Rep. Rick Ladd, R-Haverhill, argues in his write-up in the House Calendar to support the bill that it is an attempt to impose “an unnecessary mandate imposing new burdens on employers.” But he notes that employers would allow companies to still require mask-wearing.

“Business leaders support the rights of companies, schools and organizations to protect their patrons and employees from a virus that has taken the lives of over 750,000 Americans,” responded Rep. David Luneau, D-Hopkinton, writing for the minority.

There seems to be a bipartisan agreement to expand Medicaid to cover dental benefits. At least there is among members of the House Health and Human Services and Elderly Affairs Committee, which voted 19-1 in support of House Bill 103, which would ”make available comprehensive, preventative and restorative oral health care that is critical to maintaining overall health, preventing pain and suffering and decreasing costs associated with emergency room visits,” according to Rep. Joe Schapiro, D-Keene. Only Rep. Jim Kofalt, R-Wilton, didn’t buy the preventive-health-saves-money argument, calling this “an additional burden on taxpayers.”

But dentists might have more to do if the House passes HB 611, as recommended by the House Resources, Recreation and Development Committee, which would prevent municipalities from adding fluoride to drinking water.

About 10 currently do, wrote Rep. Lisa Post, R-Lyndeborough, for the majority of the committee. Most of the representatives on the committee, she writes, believe “that fluoridation should not be a decision of a government body, but a decision of the individual.”

Not everybody in the committee agreed. Fluoridation reduces tooth decay, argued Rep Chuck Grassie, D-Rochester, and communities that have ended fluoridation have changed their mind, including Calgary in Alberta, Canada, which did so in October after finding that tooth decay rose 65 percent after it eliminated fluoride in 2005.