Big mixed-use project in Exeter will include 224 residential units 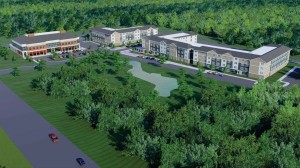 Nashua developer Tom Monahan has big plans for a site off Route 101 in Exeter.

According to Foster’s Daily Democrat, Monahan, owner of The Monahan Companies, is seeking to build The Gateway at Exeter, an $80 million mixed-used development on Epping Road that would include two buildings with 224 residential units and a 50,000-square-foot commercial building. The residential units would be built first on 10 acres of land. One building will have 75 units and the other 149 units, with 56 units designated as affordable housing.

Plans are not defined yet for the commercial space, but office, retail or specialty space is being considered for a four-acre site, Monahan told Foster’s.

Monahan said he is hoping to start construction before the fall, pending required local and state approvals. He estimates the project will take 18 months to complete, the newspaper reported.

Monahan also told Foster’s that he has applied for up to $3 million in grant funding through the state’s InvestNH affordable housing program.

“Invest NH is a critical component,” said Monahan. “If we were to just put the financials on a piece of paper and go to the bank and get financing, it doesn’t work.”