City agrees to transfer property to developer for $1 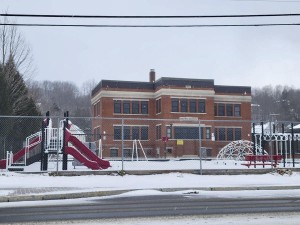 The Berlin City Council recently approved the transfer of Brown School to New England Family Housing/TKB Properties for $1. The playground equipment at the school will remain with the Berlin School District. (William Carroll photo)

After over two years of delay, in part due to the COVID-19 pandemic, the Berlin City Council last week agreed to turn the former Brown School property over to a developer to be turned into apartments.

The city council on Nov. 22 approved an “option contract” with New England Family Housing/TKB Properties for the transfer of the school property for $1.

The proposal calls for renovating the building into about 20 mixed-income apartments allowing for both market-rate as well as workforce housing units.

Berlin Community Development Director Pamela Laflamme said she will bring a contract for approval to the council’s Dec. 6 meeting.

The Berlin School District closed the school, the last elementary school in Keene, following the 2018-19 school year as declining enrollment and a lack of state funding forced the district to consolidate. The school building, which is over 100-years-old is a total of 25,416 square feet.

Originally, the city put out a request for preliminary proposals on the former school in the fall of 2019.

In 2019, two preliminary proposals, one from New England Family Housing and a second from Wildcat LLC of Jackson were submitted to the city. Both called for converting the building into apartments.

The city originally went with the Wildcat proposal, but Laflamme said the project stalled due to the outbreak of the COVID-19 pandemic and its funding source changed from solely private funding to a public/private funding project, which made it similar to the proposal originally submitted by New England Family Housing/TKB Properties.

Laflamme said the two projects were pretty comparable, with both proposing 20 apartment units, but New England Family Housing has done bigger projects in the city and is more familiar with Community Development Block Grant funding.

According to the proposal, New England Family Housing will apply for $500,000 in CDBG support in the July 2022 funding round. If approved by the Community Development Financing Authority and the Executive Council, work could begin May 2023, with completion scheduled for December of that year.