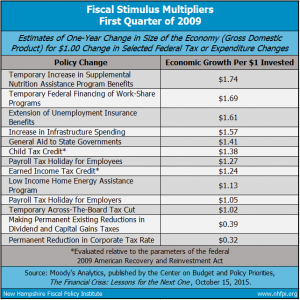 The economic damage done by the Covid-19 crisis threatens both the ability to meet short-term needs and the long-term financial stability of Granite Staters.

State and federal policies are playing important roles in providing support for New Hampshire residents and businesses through the immediate crisis. More support will be needed both to prevent widespread economic free fall and to stimulate growth as public health concerns recede. Government policy remedies should provide relief, focused on preventing further short-term economic collapse, and bolster the recovery, which will help to reinvigorate the economy after the crisis.

Policies and practices necessary to slow the spread of the 2019 novel coronavirus have led to a dramatic curtailment of economic activity.

A national forecast published April 24 by the Congressional Budget Office suggests inflation-adjusted Gross Domestic Product will decline by 11.8% in the second quarter of 2020 alone. The CBO forecast indicates the economy will be 6.7% smaller at the end of 2021 than it would have been under the pre-crisis CBO forecast.

Accompanying CBO projections also estimate the national unemployment rate will reach about 16% in the third quarter of 2020, and remain about 10% on average during 2021.

Preliminary data released April 29 by the U.S. Bureau of Economic Analysis indicate the U.S. economy contracted by 1.2% in the first quarter of 2020, or an annualized rate of 4.8%; this decline was a more severe contraction than the 0.9% estimated in the CBO’s forecast for the first quarter of 2020, which may suggest a faster or larger decline than the CBO has modeled for the future.

New Hampshire’s trajectory may look similar to that of the nation as a whole. Both retail and accommodation and food services – two of the three largest employment sectors in New Hampshire just prior to the crisis – have been dramatically affected since the middle of March.

New Hampshire Employment Security reported 125,232 people filed initial unemployment claims between March 15 and April 11, compared to separate estimates of approximately 20,000 people in total unemployed statewide during each month of 2019. The industries that generated the largest amounts of new unemployment insurance claims from March 15 to April 11 were food services and drinking establishments with 26,873 claims, administrative and support services with 11,020 claims, and ambulatory health care services with 10,115 claims. Social assistance and education were the next largest, while the accommodation industry followed with 5,565 new claims. General merchandise stores generated 4,431 claims, with other retail sectors also generating thousands of claims.

Forecasts of elevated levels of unemployment suggest that more economic stimulus may be needed even in optimistic scenarios.

While recovery may be quick relative to other recessions, the depth and nature of this downturn increases uncertainty. The prospect of the national unemployment rate remaining at or above the highest levels seen during the Great Recession of 2007-09 and its aftermath suggest economic growth may be slow following this crisis.

These policies provide immediate relief while the most important actions to protect public health limit economic activity. This economic contraction, which is the result of the need for distancing between individuals, makes this downturn different than any in the United States since World War II.

The two most recent recessions have been caused in large part by overinflated prices in assets, specifically stocks and housing, and most previous postwar recessions were triggered in part by fiscal or monetary policy decisions or shifting oil prices. This current economic contraction is the result of a dramatic decline in consumer demand for services and goods due to the implementation of policies designed to protect public health by limiting interactions among the population.

The resulting unemployment has created the need for immediate relief to avoid economic free fall. Policies that seek to avoid the financial collapse of both individuals and businesses, and support them through this difficult period of required distancing, have been the primary focus of federal and state governments thus far.

The $1.25 billion transferred to New Hampshire from the federal government under the CARES Act will primarily assist with responding to the medical needs of residents and the immediate provision of economic relief directly related to the Covid-19 crisis. The funds must be spent or returned by Dec. 30, indicating a short-term focus relative to the potential length of the economic recovery from this crisis.

However, the resources can also be deployed to help provide a foundation for that long-term economic recovery.

As the immediate public health concerns recede over time, policymakers can employ more familiar tools used to generate demand and make investments to spur an economic recovery. These tools are more directly stimulus, rather than relief, to promote a sustainable economic expansion.

Promoting an economic recovery efficiently requires strategic and effective investments. During the recovery from the Great Recession, Moody’s Analytics evaluated several policy options for economic stimulus, measuring the dollar amount of economic activity generated per a one dollar investment by the government.

Based on an evaluation of federal policies incorporated into ARRA, which helped the nation recover from the Great Recession, this analysis estimates that the Supplemental Nutrition Assistance Program (SNAP) was the most effective federal economic stimulus examined.

SNAP, which provides resources to purchase food to individuals and families with low incomes, generated $1.74 of economic activity for every dollar invested. Extending unemployment insurance benefits generated $1.61, while infrastructure spending generated $1.57. A payroll tax holiday for employees had a smaller multiplier, of $1.27, while the estimated multiplier fell to $1.05 when the tax holiday was for employers rather than employees. An across-the-board tax cut was estimated to generate $1.02 for every dollar of lost revenue during that recessionary period.

Making federal tax cuts on dividends and capital gains permanent was estimated to generate $0.39 per dollar of federal revenue lost, while cutting corporate taxes was projected to produce $0.32 in economic activity per dollar of revenue reduced.

These estimates are similar in key ways to those for economic output and employment produced by the CBO, and those estimated specifically for SNAP by the U.S. Department of Agriculture.

Additionally, loss of employment in the public sector can hamper economic recoveries. An aggregate reduction in jobs in federal, state, and local governments during the recovery from the Great Recession likely slowed growth, particularly relative to previous recoveries.

Not a rapid switch

Unfortunately, the shift from relief to recovery will not be instantaneous, as public health concerns will likely linger for some time, requiring personal distancing requirements and guidelines to be eased slowly. This gradual transition will likely limit the effectiveness of many policies designed to reinvigorate the economy. Fortunately, many of the policies aimed at providing near-term relief also help the long-term recovery.

Policies to provide direct aid to individuals, such as increased SNAP benefits or access to SNAP and aid to unemployed individuals, provides both relief through the public health crisis and economic stimulus to support a recovery. These policies help individuals with limited resources continue to support themselves, while also supporting the businesses from which they purchase goods and services.

To the extent they may begin early, investments in transportation or housing infrastructure may also keep individuals employed, or even support more employment, during both the relief and recovery periods as long as projects can be completed safely and begin quickly if not already initiated. These projects also help businesses that rely on efficient transportation infrastructure and have employees who need housing.

Considerations of the best ways to deploy the $1.25 billion appropriated to New Hampshire by the CARES Act should incorporate understanding of the need for immediate relief and support for long-term recovery. Key policies can help ensure the health, well-being and economic security of Granite Staters during this public health crisis and throughout the coming economic recovery.