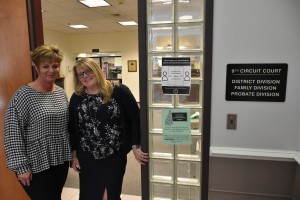 Unlike enjoying a good courtroom drama, going to court — especially for people dealing with major life crises — can be a daunting and unpleasant experience.

New Hampshire’s Circuit Court, which includes District, Family and Probate divisions in various locations within 10 circuits — handles over 125,000 criminal and civil cases per year. Since the start of the pandemic through Dec. 31, 2021, there have been 271,868 hearings. Sixty-three percent of those hearings involved at least one person participating remotely.

While numbers are important for administrators lobbying the state legislature for funding or knowing how to best utilize court staff, they can’t capture the anxiety people feel when they need to fill out a domestic violence petition for immediate protection from a dangerous partner. They don’t reflect the sadness of someone in their 90s seeking an ex-parte motion allowing them to access the account of their spouse of over 60 years who has recently died. Numbers don’t paint a picture of the desperation created by language barriers that can exist for non-English speakers. They don’t, in short, tell a personal story.

For Manu Cunha, making sure people aren’t treated like a number means getting to know their personal stories and helping them solve problems when they come to court.

Cunha, a court assistant since 2008, started in early December 2021 as the court navigator at the Nashua District Court, which has the highest volume of probate cases in the state, as well as a high number of domestic violence petitions.

“It’s rewarding work and people are very thankful for the help,” Cunha said. “The challenge is to convince people we’re not an adversary.”

The Navigator Program, now in a pilot phase, originated with a proposal by the New Hampshire Access to Justice Commission, which was created to make changes to improve citizens’ access to the courts when dealing with civil matters. Sixteen other state judicial systems, as well as hospitals and various organizations around the country, use navigators to provide better customer service.

New Hampshire Circuit Court Administrator Heather Scheiwe Kulp said the position in Nashua, which the court hopes to eventually expand, is one of many solutions the court system and the commission have implemented to increase access to justice and reduce confusion by assisting people going through filing processes.

“The position provides people with legal information and also helps to identify ways the court system can continue to offer legal information and improve the services that it offers,” said Scheiwe Kulp, explaining how the idea of a navigator emerged with a subgroup of the commission, which met throughout 2020-21.

In 2021, there were 5,868 filings in Nashua District Court, including criminal, civil, landlord-tenant and small claims. The court also had 1,350 family filings, including domestic violence, and 3,215 probate filings.

The original proposal from the Access to Justice Commission was to create a position for a court navigator due to housing-related issues during the first summer of the pandemic in 2020.

“[After] the court received funds and designed a few new processes to manage landlord tenant matters, [it was] determined the Navigator would focus on other less-resourced areas for improvement,” Scheiwe Kulp said. “[And] the navigator can certainly assist individuals and make recommendations for improvements in the housing area.”

Scheiwe Kulp said navigator programs that exist in other states are run by nonprofits or bar associations, but not an employee of the court as in Nashua.

“[W]hat the commission task force did was to convert these other models to be a court system employee model,” said Scheiwe Kulp. “The navigator in Nashua is doing the work the court staff frankly doesn’t have the time to do because of the understaffing of the courts that they otherwise could be doing.”

Circuit Court Administrative Judge David King said service center coordinators in various courts, who fulfilled a role similar to Cunha’s in Nashua, were in place when he was administrative judge for the probate court in 2007 but that these positions were abandoned because of budget constraints.

“If money were no object, it would be great to expand,” said King, referring to the potential for the Navigator Program in Nashua being implemented in other courts around the state as well as hiring an attorney to assist people with legal questions when they come to court.

“This would be one step further in helping folks understand the legal process,” King said.

Cunha said some of her many duties as navigator include triaging people’s needs in the lobby, providing help filling out forms, guidance with the e-filing kiosks, directing people to various legal services, and speaking with people virtually.

Overall, she says, the position helps to stop some of the backup of traffic in the lobby while providing a welcoming face for people coming to the court.

Eighty-eight percent of the help she provides is at the kiosks, and 12 percent is on the phone.

“Some days it’s a steady flow of people all day long and other days it’s slower,” she says. “But overall, it balances out.”

A recent encounter with an elderly man illustrates the type of personal interactions which she says makes her job meaningful.

The man, who had lost his wife of 60 years a week earlier, entered the lobby of the Nashua court with his son-in-law, needing to file forms to retrieve money from a bank account.

“He was crying because he wasn’t on the account,” Cunha said. “He needed an ex-parte motion. This poor old man was beside himself and would never have known how to do that without help. It was emotional.”

Cunha recalled the many times she has received hugs from people, cards in the mail and even people who return to the court to say thank you for the help they’d received.

“We’re understaffed and overworked,” said Cunha, who works as much as an hour or more with people some days. “This position takes the burden off the girls.”

Circuit Clerk Sherry Bisson, who has worked in the court for 36 years, said that because Nashua is the largest probate court in the state, more help is needed for people filing for estates.

“These cases bring a lot of emotion,” she said, “especially when people have lost a loved one or a child. They’re not in a good frame of mind at these times and often not able to afford an attorney. We are able to walk them through the procedure.”

Bisson and Cunha also stressed the mental health challenges in the state that exist for the court.

Part of her job is developing a resource list for people with Involuntary Emergency Admissions and the court works closely with the Greater Nashua Mental Health Center.

“We’re trying to get a better sense of what people are coming to the court for,” said Bisson, who added that people sometimes drive from as far away as Keene just to have the face-to-face interaction. “By having Manu in the lobby we’re hearing what people really need.”

Cunha says she understands how difficult it can be for people coming into court and she is grateful to have the chance to help.

“We don’t think of these cases as numbers, they’re people,” she said. “I want them to feel like we gave them the time they needed.”