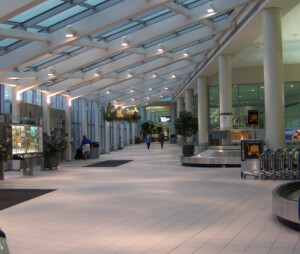 Manchester-Boston Regional Airport is receiving over $2.8 million to help cover the costs of an energy-efficiency upgrade at its terminal.

The grant from the U.S. Department of Transportation – using money appropriated in the Bipartisan Infrastructure Law – was announced Monday by members of the state’s congressional delegation.

The $2,821,120 award will be used to replace some 16,000 square feet of the terminal’s original translucent fiberglass canopy that “has reached the end of its useful life,” said Ted Kitchens, the airport’s director.

He said the new ceiling “will improve natural light and heating efficiency in the terminal, allowing us to reduce our carbon footprint and increase energy efficiency overall.”

“Improving and updating Manchester-Boston Regional Airport is critical to our regional economy and ensuring individuals can travel safely and efficiently,” said Congressman Chris Pappas in a joint statement issued by the four members of the state’s all-Democratic congressional delegation.