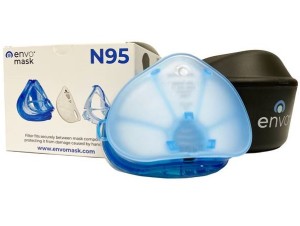 Amid the height of the Covid pandemic, Sleepnet Corp. of Hampton, ranked on the 2022 Inc. 5000 list, developed the Envo mask, which company founder Tom Moulton said ‘is the best N95 mask in the world.’

Led by Sleepnet Corp. in Hampton, 10 New Hampshire businesses were named to Inc. magazine’s list of the 5,000 fastest-growing companies in the U.S.

Sleepnet, a company that makes masks and other equipment that helps people deal with sleep apnea as well as ventilation gel masks and N95 coverings, was ranked No. 2,384 on the Inc. list with a three-year growth rate of 244 percent. Not far behind Sleepnet with a three-year growth rate 233 percent was Hooksett based fleet management company Merchants Fleet, at No. 2,483 – a significant jump for the company, which in 2020 was listed at No. 4,986.

Other Granite State businesses on the Inc. 5000 list were: