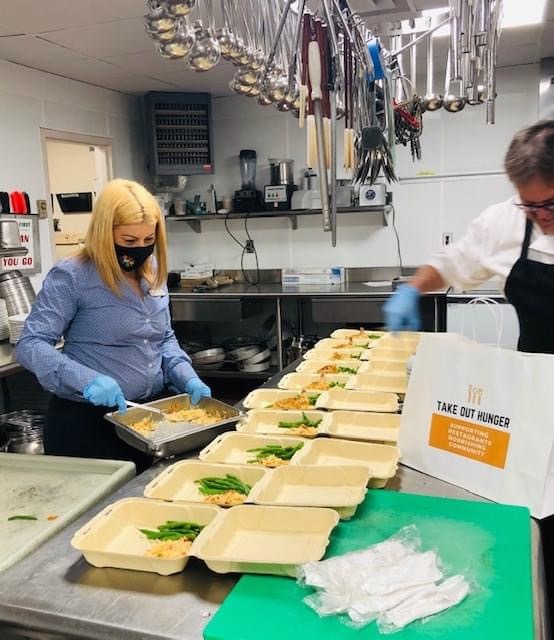 Staff from Black Trumpet prepare a rice and bean meal that will be distributed to people in need by Gather, through a partnership with Take Out Hunger. (Courtesy photo)

Last month Evan Mallett, owner and chef at Black Trumpet restaurant in Portsmouth, received an email that made him teary-eyed. It was from a local, who had picked up a free meal that Mallett and his staff had made for people who are experiencing food insecurity during the pandemic.

“With my current employment status, buying food from a restaurant is not an option … I am a foodie, former server, laid off retail manager now,” wrote the person, who asked that Mallett keep them anonymous. “I really cannot explain how… happy my mouth and tummy are right now. So again, THANK YOU for satiating my foodie taste buds and warming my soul.”

For Mallett, the email summed up what he describes as a “calling” to help feed the hungry during the pandemic.

“Many of us have in our minds an image of what it means to be hungry,” Mallett said. “The face of hunger is not just one sort of cliched face. It’s a myriad of faces, many of which will look familiar to us. It’s really obvious to me now that there are a lot of people who are food insecure who look just like me… and are not far from me in their career.”

Over the past year, the pandemic has rocked the food system in the state. The number of people who are food=insecure — that is, who don’t know where their next meal will come from — has risen. At the same time, restaurants like Mallett’s have been threatened by declining sales and limits on in-person dining. Many people who work in the restaurant industry are unemployed or have had their earnings cut dramatically.

A new initiative that began in December is aiming to address all of those issues.

Take Out Hunger raises funds from individual and corporate donors. The organization then pays restaurants about $10 per meal, to create meals to feed people in need. The restaurants are partnered with local nonprofits that integrate the meals into their existing food distribution networks. In some cases, the nonprofits provide raw ingredients that might otherwise go to waste.

The low-overhead model benefits two groups of people who are hurting because of the pandemic: the food insecure, and restaurant workers, said Helen Crowe of Portsmouth, co-founder of Take Out Hunger.

‘Why Reinvent The Wheel?’

Crowe first had the idea for Take Out Hunger when she found herself frequently ordering take out to support her favorite local restaurants.

“There’s only so much takeout one person could eat,” Crowe said.

She began looking for a way to donate meals to people who needed them more than she did, while still putting money in the hands of restaurant owners and employees. As she searched online, she came across Cooking For Community, an organization that has done similar work in Portland, Maine, distributing roughly 100,000 meals since the beginning of the pandemic.

Crowe reached out to the founders of that organization, including Caroline Teschke, agency partnership lead for Cooking For Community.

“My way of thinking is, why reinvent the wheel?” Crowe said. “It was a brilliant idea, and was something that was getting a lot of traction in different areas.”

Teschke provided Crowe with information on how the organization ran. Cooking For Community has leveraged skilled volunteers to raise more than $1 million in less than a year, nearly all of which has gone into local restaurants in Portland, Teschke said.

“We put it out there so that people hopefully can use what’s been gained from our experience,” Teschke said. “Take our model, and run with it.”

That’s precisely what Crowe did. She reached out to Deb Anthony, executive director of Gather, an organization dedicated to ending hunger on the Seacoast. Gather became the fiscal sponsor for Take Out Hunger, administering funding in order to let Crowe and her co-founder, Carol Bridges of Fremont, to focus on running the organization.

Well before Take Out Hunger, Mallett was working with Gather to distribute meals to people in need. Back in the spring, Mallett received funding from the Paycheck Protection Program. In order for the loan to be forgiven, he had to keep his five employees working, but to meet state guidance, his restaurant remained closed to in-person dining.

“It seemed like an opportunity to go to work with a completely different business model,” Mallett said.

Black Trumpet already worked closely with local food producers. Mallett reached out to those producers and to Gather. If Gather could provide donated food to him, he proposed, he would use his PPP funding to pay his staff to prepare meals, which Gather could distribute, free of charge.

This built on previous efforts by Gather volunteers to utilize food that is nearly expired or that will soon go bad. The nonprofit has relationships with grocery stores to do “fresh rescue” of food that would otherwise be thrown away. In order to utilize that food, it must be prepared quickly.

“It’s kind of like going into the ‘Chopped’ set,” said Anthony, referring to the TV show on which contestants must make a meal out of a slew of random ingredients.

With plenty of food donations coming in to Gather, Mallett realized that his staff could produce more meals in a kitchen that was bigger than the one at Black Trumpet. He contacted a fellow restaurant owner about using the banquet kitchen at The Atlantic Grill in Rye. With the larger space, Mallett’s staff was producing hundreds of meals each week for the eight-week duration of the PPP funding.

“When that was over, it was very clear to Deb [Anthony] and myself that we wanted to keep going,” Mallett said. Gather began paying Mallett’s employees to prepare meals, until Crowe proposed that Take Out Hunger step into that role.

Crowe’s involvement allowed the idea to grow. Now, Take Out Hunger works with 18 restaurants that prepare 1,000 meals each week. The meals are distributed by 13 nonprofit partners throughout the state.

Anthony said that getting more people involved has been critical.

Teschke, of Cooking for Community, said that these restaurant programs provide more than just an antidote to hunger.

“Feeding people is the critical thing, but giving a lovingly prepared meal says more than that,” she said. “It gives dignity and love. It forms a relationship. There’s a big difference between getting a beautifully prepared meal, as opposed to an apple and sandwich in a bag, which does the job.”

Mallett said that he has received many emails of thanks for the meals he has prepared. But the one that draws tears every time he reads it was especially meaningful.

“In that moment I felt a sense of purpose,” he said. “A higher purpose than I have ever felt as a chef … that my experience and talent can be put together to feed not only the 1% who can dine in my restaurant, but the 99% who have never heard of my restaurant, and would likely never go there.”

Crowe said that the people who benefit from the meals funded by Take Out Hunger recognize and appreciate the way the community has come together to feed them.

“There’s lot of thought and effort that goes into the meal,” she said. “From what I’ve heard, they see that and they appreciate that.”