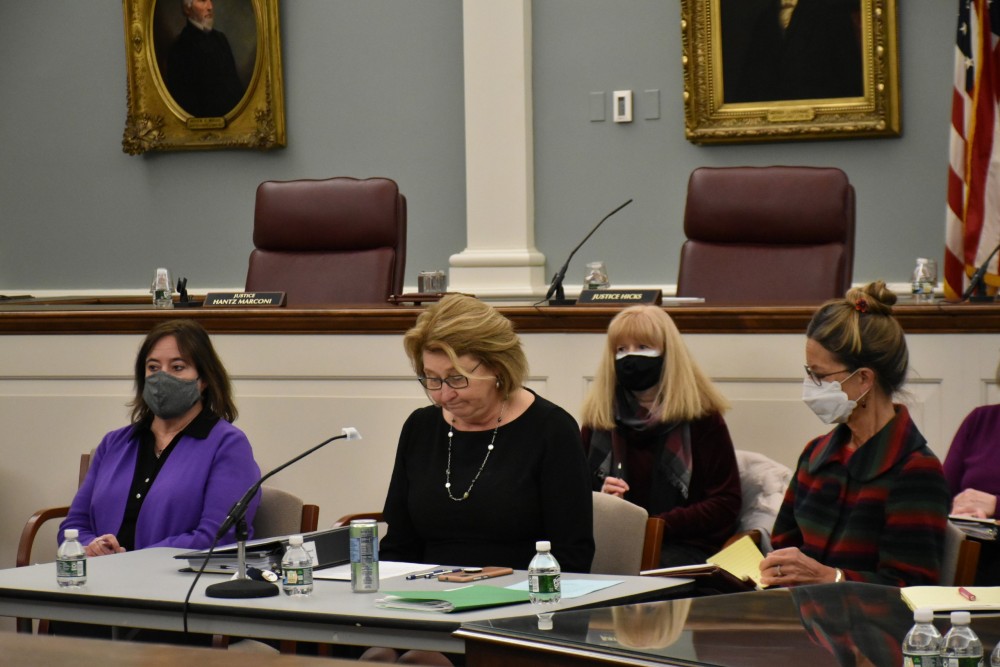 The task force includes representatives from the New Hampshire Coalition Against Domestic and Sexual Violence, law enforcement, prosecutors and defense counsel, among others. It was created following the shooting of Lindsay Smith, 33, in Salem, Mass., whose petition for a protective order from her former partner, 55-year-old Richard Lorman, of Wilton, NH, was denied last Oct. 20 by Hampton District Court Judge Polly Hall.

Wilton was found dead of an apparent self-inflicted gunshot wound at the scene.

Some of the subjects the task force is reviewing include: circuit court practice and procedure public access to the criteria for appellate decisions related to domestic violence and civil stalking protective orders and increasing access for domestic violence victims to legal counsel.

Supreme Court Justice Barbara Hantz Marconi presided over the hearing that included at times painful testimony from those recounting stories of domestic violence and their experience with the New Hampshire judicial system.

“That’s a super scary thing for me to say as a provider, but the protocols that are in place just don’t make sense for the realities of what domestic violence looks like,” she said. “We’re constantly putting kids in dangerous situations.”

Hodge emphasized that New Hampshire judges and the Supreme Court are being treated unfairly regarding the pressure placed on them to understand complex psychiatric cases.

“There’s no way I can expect the judges in New Hampshire to know what complex PTSD looks like, to know what it feels like to be a victim, to know what narcissistic personality disorder looks like,” she said. “You have these facts that come before you that are not in your wheelhouse. You’re not trained in developmental psychology or developmental medicine or pediatric medicine.”

Portsmouth attorney Alan J. Cronheim, who spoke on behalf of the National Association of Criminal Defense Lawyers, is one of the members on the first District Court Domestic Violence Protocol Committee, which led to the first shelter for victims of domestic violence in the state and told the task force he represents both defendants and plaintiffs in restraining order cases.

Cronheim expressed gratitude to the task force for their work, which he referred to as involving “competing and complex” issues regarding domestic violence policy.

“In my view, the challenge is to provide relief for those who are at risk while honoring fairness to the parties, and due process,” Cronheim said.

New Hampshire Coalition Against Domestic and Sexual Violence Executive Director Lyn Schollett said while the report contains seven helpful recommendations to improve the handling of cases for survivors of intimate partner violence, none of them address the judicial system or judges.

“There needs to be some serious conversations about the judicial system,” Schollett said. “The recommendations are about advocates, forms, clerks — and that’s helpful — but we need to be having a bigger conversation.”

Schollett said the courts need to look more closely at statewide protocols for domestic violence and the standards for obtaining protective orders.

Protocols documenting how the entire protective order process should be handled by the courts are often not being followed by judges, Schollett said.

She added that the standards for obtaining protective orders under RSA 173 B, the state’s domestic violence statute, are sometimes buried in case law that is “virtually unavailable to victims without an attorney or an advocate to advise them how to plead.”

In New Hampshire, 12 percent of people seeking restraining orders have an attorney.

“What’s so important about that is that when this remedy was created by the Legislature it was intended to be available to a victim who doesn’t have a lawyer,” Schollett said. “What has happened and what is so deeply troubling, is that through case law, the courts have added requirements to the law for people seeking restraining orders and there are new higher standards often in unpublished opinions that are often inaccessible to victims.”

In response to one of the recommendations made in the report — to develop better tools to ensure survivors of intimate partner violence can access all protection order options, such as stalking orders — Schollett agreed the courts have a role in informing victims of all resources that are available.

“But even then, if you pull the Judicial Branch protocols up, you’re not going to see things like ‘ongoing and specific’ in the 90 pages of protocols because it’s in unpublished case law,” she said.

In their findings, the committee report states that the “credible present threat” needed to obtain a restraining order under RSA 173 B, must also include conduct that threatens the plaintiff’s physical safety, “as opposed to his or her emotional or financial wellbeing. [And] additionally, the defendant’s threat to the plaintiff’s physical safety must be ongoing and specific. The plaintiff must ‘show more than a generalized fear for personal safety based upon past physical violence and more recent non-violent harassment to support a finding that a credible threat to her safety exists.’”

NH Legal Assistance attorney Mary Krueger, who works on the Domestic Violence Advocacy Project representing victims and survivors of Intimate Partner Violence seeking protective order hearings, said NHLA worked to amend the language in RSA 173-B in 2010 to ensure that petitions for protection would be granted so long as an “ongoing pattern of abuse” was established.

This was the result, she said, of Tosta v. Bullis, a case in which the court found insufficient evidence to support a finding the defendant was engaged in abuse that warranted a protective order.

The court found that because the couple had lived together during the nine months that passed between the assault and the plaintiff’s filing for a protective order, the threat wasn’t recent enough.

“The language was added to overcome Tosta so the courts could look at these situations for victims as an ongoing pattern of abuse,” Krueger said. “It also addressed the meaning of recent conduct, to be any conduct that happens in combination with prior acts.”

As an example, Krueger described a situation within a relationship, for instance, when alcohol was a catalyst for violent behavior that prompted the need for more discretionary language.

“There are situations, such as where, [the offender] might stop drinking for a time but then starts again and begins exhibiting behavior that signals abusive behavior from the past,” Krueger said.

In the Smith case, Lorman makes specific threats that are documented in the petition that would seem to have met the standard for an ongoing pattern of abuse, Schollett said.

“[B]ut [Judge Hall] said there was no credible threat even though [Lorman] said ‘I’m going to f— you up.’ It meets the standard laid out in statute. But courts since then have pushed victims to show that threats are specific and ongoing,” Schollett said.

The case the Judicial Branch committee looked at in making their recommendations was the Supreme Court case of S.K. v. J.M.

“This case is particularly relevant to the committee’s review,” the report states, “[Because] Judge Hall stated in her interview that she specifically had this case in mind when considering whether to issue a final protective order” for Smith.

In S.K. v. J.M., the defendant appealed a Circuit Court decision granting a final domestic violence order of protection to the plaintiff. The Supreme Court held that the trial court erred in determining that the defendant posed a credible threat to the safety of the plaintiff and reversed without a formal reported opinion.

The committee report states that S.K. v. J.M “illustrates the stark differences between current public or academic understanding of the threat posed by perpetrators of IPV and the narrow definition of “credible present threat” under RSA chapter 173-B.”

It also demonstrates how a trial judge who understands the dynamics of IPV including manipulation, coercion and harassment may still be unable to make the legally required finding that such behavior constitutes a “credible present threat to the plaintiff’s physical safety.”

Krueger said the task force report refers to non-public cases circulated in the court system that involve protective orders that were overturned, such as the S.K. v J.M. case, because they didn’t rise to the level of a “credible threat.”

“The task force has talked about the use of non-precedential cases and we may need more guidance because these cases aren’t available to the public. Not disseminating this info can create confusion,” she said.

Paul Berch, former director of the Vermont Public Defender’s Office in Windham County, where he worked for 34 years until 2009, is a New Hampshire state representative. He says there are a lot of competing interests in these cases.

“New Hampshire, because of our culture, may be less willing to take away people’s Second Amendment rights, so we may brush up against the issue of protecting liberty, but I suspect that when a judge is sitting there, he or she is looking at the same facts and is trying to preserve safety.”

Berch said these cases involve two important aspects and he encourages the demystification of the entire process.

“One, the issue of demystifying the process. That’s almost always a good thing. The more people understand the better. I found as a public defender that I spent most of my time explaining the system to my clients and my clients to the system. That’s a large part of what you do,” he said. “The other part is you don’t want to put your thumb on the balance one side or the other inappropriately.”

Attorney Dennis Thivierge, who has worked on multiple domestic violence cases in which victims are seeking petitions, said in practice there isn’t always a “credible present threat.”

“Obviously if a person has been restrained for a month you could say for 30 days there has been no credible threat, but I think that has always been a soft spot in these cases,” he said. “It’s an ongoing issue just in my own practice, I end almost every single case with the same question: ‘If the defendant wasn’t restrained today would you still be afraid of them? And 99 percent of the time they say yes. I would still be afraid of them.”

Krueger, who is part of the task force, said she hopes the group will release specific charges after the hearing for groups to work on and would like to see a revitalization of work that has been done in the past.

“When I started in 2006, there was a thriving, active, multidisciplinary approach to cases. We used to have better interdisciplinary cooperation between intervention programs, crisis centers, DCYF, lawyers, therapists and supervised visitation centers,” she said. “We have lost a lot of ground in terms of services available to support families. And I’d like to revitalize these programs.”

Thousands of people sought protection from domestic violence and stalking in New Hampshire courts between 2018 and 2019.

In a biennial report from 2018-2019, the NH Justice Department reported 7,934 domestic violence petitions and 4,200 civil stalking petitions were filed by people requesting protection from abuse. In addition, 7,501 criminal bail protective orders were issued.

Of the nearly 6,000 filings for final orders of protection, which would prevent abusers from owning weapons or having contact with victims under RSA 173 B:10, 38 percent were granted, and 43 percent denied.

The task force has until March 1 to report its conclusions and recommendations to the Supreme Court.