Food insecurity in New Hampshire made worse by pandemic

Stigma, lack of awareness may be keeping families from seeking services 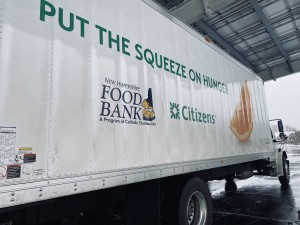 In January, more than one in four Granite Staters reported that it was at least somewhat more difficult than usual to pay for typical household expenses, including food. And yet, New Hampshire ranks among the lowest in the nation for people making use of food assistance programs.

This data compiled in a Feb. 8 report from the New Hampshire Fiscal Policy Institute, explains the struggle to put food on the table continues to be exacerbated by the Covid-19 pandemic. Low-income families already tend to have higher levels of food insecurity before taking into account the struggles of Covid-19. Nutritional Aid Programs like SNAP (Supplemental Nutrition Assistance Program, or food stamps) are available for families that need it, but lack of awareness of these programs and a stigma surrounding food insecurity interfere with families accessing support.

Liponis said that their agencies are seeing more families than ever before, and that unemployment is the main contributor. Losing jobs due to the pandemic is causing more people and families to move in together, increasing the number of mouths to feed per household.

Direct aid programs like SNAP shouldn’t just be considered as a safety net, but also as a program that stimulates the economy, according to Michael Polizzotti, policy analyst for NHFPI. The money given to families in need goes right back into their respective communities, as they typically spend it right away in their own local grocery stores.

Moody Analytics found that in 2009 that for every dollar spent from SNAP, approximately $1.74 of economic activity was generated.

Despite the need, data shows that New Hampshire’s participation in several of these nutritional aid programs is lower than most other states according to New Hampshire Hunger Solutions, an organization that advocates for the food security of vulnerable families.

The organization’s Laura Milliken said that the SNAP saw an increased participation at the start of the pandemic, but decreased in June 2020. While it’s hard to tell exactly why participation in these programs has been low, she said her theory is that people who initially applied for SNAP benefits may have become ineligible after they received increased benefits from Covid-19 relief. When those benefits eventually decreased in the summer months, they may not have known that they could reapply for SNAP.

Milliken said some people affected by the pandemic may never expected to need those programs – they may still not know they’re eligible or think that they aren’t in need of help. The administrative barriers could be a disincentive as well, she said. “When people’s lives are as chaotic as the pandemic has made them, any administrative burden is hard to do,” said Milliken.

Liponis said New Hampshire’s population could take more advantage of SNAP, and that there’s an unrepresented population that could benefit from it. The Food Bank has a hotline for those who are looking to apply, she said. “The eligibility requirements have changed due to Covid, and so it’s most likely that you should give it a shot if you could apply and you could benefit from Food Stamps.” New Hampshire residents can apply for SNAP here and view eligibility requirements here.

States set their own parameters and eligibility requirements for nutritional aid programs like SNAP. New Hampshire is one of the few states that didn’t waive the interview process for SNAP during the pandemic, while other states have. New Hampshire has instead offered the option to do the interview online rather than in-person.

In addition to administrative barriers, the stigma surrounding food insecurity is often a hurdle for families as well. “We are in an unprecedented pandemic that has put stresses on our economy and society that haven’t been seen in a century,” Liponis said. “You cannot have pride during a time like this when it is of no fault of your own that you were put in the position where you need help.

Schools have played a big role in helping those touched by food insecurity as well, said Milliken “Schools are bending over backwards trying to get meals to students in need,” Milliken said. “The free and reduced lunch program provides crucial nutrition to roughly 27% of New Hampshire children – and that’s a pre-pandemic number.”

During the start of the pandemic, the USDA offered the opportunity to have all students participate in free meals. In New Hampshire, schools are delivering meals on bus routes, and districts are partnering with other community organizations to send food home on the weekends.

Jennifer Gillis, assistant superintendent of operations in Manchester, the largest school district in New Hampshire, said it has made good use of waivers from the state, allowing it to feed more students. She said the district wanted to make sure it wasn’t just helping families that needed assistance in the past, but also reaching out to everyone.

Jim Connors, food service director of the Manchester School District, said they’re providing breakfast and lunch to students who are attending in-person, and on Monday, Wednesday and Friday, families can pick up two days’ worth of meals.

Gillis said the help of Connors and his team, along with the Manchester Transit Authority and a “number of community partners and volunteers” in providing meals for families with school-aged children has been “an absolute highlight” for Manchester.

Gillis said they’ve also seen some families who received food, come back and offer their help in return.

“We saw families who may not have otherwise needed that type of service or support in the past recognize that we were there without question or judgment, and they wanted to give back very much the same way that it had helped them,” she said.