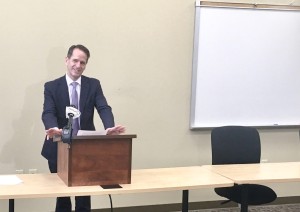 Education Commissioner Frank Edelblut, shown here during a press event in February, has drawn criticism for an op-ed he wrote this month. (Ethan DeWitt-New Hampshire Bulletin)

An op-ed by NH Education Commissioner Frank Edelblut that urges teachers not to “undermine the sacred trust” of education has become a new flashpoint in a charged national debate over the direction of school curricula and the place for LGBTQ+ topics in the classroom.

The opinion piece, which Edelblut released April 15 and appears in the April 22-May edition of NH Business Review, stresses the importance of teachers respecting “the value systems of the families responsible for raising them.” It states that “biases are beginning to seep into our own institutions” and points to teachings in New Hampshire around gender identity, personal pronouns, anti-racism literature and the Black Lives Matter movement, and LGBTQ+ students “that parents have identified as conflicting with their values.”

The piece was released alongside a 74-page document of photographs and screenshots of New Hampshire classroom instructional materials that Edelblut says have been submitted to the Department of Education by concerned parents.

“Parents of students taking an art class should have a reasonable expectation that they will be learning about, well, art,” Edelblut wrote. “They should not be concerned, as occurred in another New Hampshire classroom, that the introduction to art will begin with a lesson in pronouns and links to Black Lives Matters for kids and LGBTQ+ for kids.”

In an interview, Edelblut said the presentation of the classroom materials was not meant to imply that the department is actively opposed to the content of the teachings, stating that the department is not attempting to “adjudicate” the parents’ concerns. Instead, he argued, the examples – which have redacted names and identifying details – indicated scenarios where teachers should seek parental input and hear out concerns.

“Those are artifacts of parents who have reached out to this department, expressing concern that those artifacts – they believe – don’t support and may undermine the value system that they are trying to pass along to their children,” he said.

But the commissioner’s direct reference to reported cases where teachers asked students their preferred gender pronouns, and to one case where a teacher introduced themselves to students using “they/them” pronouns, has raised concerns among some LGBTQ+ advocates.

“Gender identity nondiscrimination has been the law in New Hampshire, and it specifically extends to public schools,” said Palana Hunt-Hawkins, an advocate with Trans Action New Hampshire. “So … to me, someone who has a nonbinary gender identity, for example, isn’t debatable. You know, it’s just who that person is.”

“Just thinking about him as the education commissioner, it was just kind of incredible to see him throw educators under the bus and not stand strong behind them,” she added.

Responding to the criticism, Edelblut said he believes the vast majority of teachers are teaching appropriately, and stipulated that he supports students of all backgrounds and orientations.

“In my entire tenure here as a commissioner, I believe in the inherent value of every single individual student and believe in crafting pathways to success – pathways to bright futures – for every single student,” he said. “And I believe a way forward relative to this is, again, transparent, open communication with families.”

The classroom materials Edelblut presented in his docket range widely. One details a “perception quiz” in which students are asked multiple choice questions regarding racial disparities in the United States. Several photos include the use of the book “Stamped: Racism, Antiracism and You,” a book by Ibram X. Kendi geared to young readers that seeks to outline the history of racism in the United States and that some conservatives have opposed. One submission includes a photo of a classroom poster about socialism, which quoted critics of the economic system but then states that “socialism also has another meaning,” and continues that “most European governments are parliamentary democracies paired with economic socialism. They are not fascist governments.”

And many of Edelblut’s examples delve into materials relating to LGBTQ+ identities in the classroom. In one, a nonbinary teacher asks students to refer to them with “they/them” pronouns. In another, students are asked in a pre-class survey what their preferred learning style is, what they are hoping to get from their teacher, what their preferred pronouns and names are, and whether that name can be used in front of other students, when contacting parents and guardians, and with other teachers.

At an April 14 presentation before the state Board of Education, in which he walked through the docket, Edelblut argued that the photos show classroom teaching “that feels like maybe it’s not specifically on point” and “may not be age appropriate.” He said that a majority of the materials had been submitted to the department by parents over the past month.

The New Hampshire complaints come in the wake of a highly publicized battle in Florida over a law that would bar classroom discussion on sexual orientation or gender identity in kindergarten through third grade and limit it in other scenarios. That law, referred to by opponents as the “Don’t Say Gay” law, has been championed by conservatives as a means to eliminate what they say is sexual “grooming” from classrooms and ban topics that parents should have control over.

In his op-ed, Edelblut alluded to that debate, criticizing the Walt Disney Company, which has opposed Florida’s new law and has been chastised for its position by conservatives.

“Fortunately, parents can choose to turn off Disney,” Edelblut said. “They can’t, however, easily escape the efforts of activist educators who might be knowingly dismantling the foundations of a value system they are attempting to build.”

But asked whether he would support replicating Florida’s law in New Hampshire, Edelblut declined to answer directly, stating that he is not intimately familiar with the law.

“I have not read that law there, so I can’t comment on that,” he said.

Exactly what the Department of Education plans to do with the instructional materials presented by Edelblut has not been made clear.

New Hampshire does not have a law barring teachers from discussing LGBTQ+ issues in classrooms. Last year, lawmakers did pass a “freedom from discrimination” law that bars teachers from teachings that insinuate that one protected class is inherently oppressive over another class, that one class is inherently superior to another, or that one class should be treated differently from another. But that law does not explicitly address the teaching of LGBTQ+ topics, such as gender identities and preferred pronouns. Two teachers unions have brought lawsuits in federal court against the Department of Education and other state entities, arguing that the law is unconstitutionally vague.

In his interview, Edelblut stressed that the department is not meting out punishments for schools and teachers based on instructional material, despite the decision to release the docket of examples.

But the department is accepting and examining the complaints, and in some cases is in contact with parents who are making them, Edelblut has said. Currently, department officials are advising parents to bring their concerns to the teacher or to the school administration before taking it to the department, and to utilize an existing state statute that allows parents to withdraw their children from lessons they object to as long as they arrange for alternative instruction.

“We just want to make sure that they understand what’s available to them in order to be able to use those (tools),” he said.

Still, Edelblut has left the door open to punishment under the new law if an investigation deems it is merited.

“If in the course of our investigations, we observe any type of violation of an educator code of conduct, of course we’re going to take that responsibility, but a lot of this responsibility was at the local school boards or potentially the Human Rights Commission,” he said.

Edelblut’s op-ed – the first from the commissioner to directly criticize certain teachings around LGBTQ+ issues – has sparked intense blowback from the left in the days since its release.

Devon Chaffee, executive director of the American Civil Liberties Union of New Hampshire, denounced the op-ed and argued it attempted to have students’ existences “rejected and erased.”

“It is shameful that anyone in New Hampshire would attack and silence youth identities in the classroom under the guise of ‘values,’ while simultaneously ignoring the value of recognizing the unique perspectives of – and showing basic decency to – historically marginalized students,” Chaffee said in a statement.

And in a joint letter this week, the Democratic members of the New Hampshire House and Senate education committees framed the letter as a final straw against Edelblut, and urged Sununu to replace him.

“After reading a letter written by the Commissioner published over the weekend, where he used a string of conservative buzzwords in an attempt to attack teachers in our communities and make them the object of suspicion and mistrust, we feel an important line has been broken by this Commissioner,” the letter stated. “As a result, we no longer have confidence in this Education Commissioner and his ability to lead the Department of Education.”

For his part, Edelblut says the op-ed was intended only to urge open dialogue between teachers and disgruntled parents – not to pick sides in those debates.

“The purpose is not to adjudicate the artifacts that are coming in. The purpose is to say, ‘We need to support our families,’” he said.

But to Hunt-Hawkins, a trans woman, the very existence of classroom debates on family values in the classroom touches on a deeper concern.

“I think in the last couple of years, there’s been a real conflation of gender identity and sexuality, where people operating from anything outside of heterosexuality are immediately deemed as being ‘sexual’ and ‘too sexual,’” she said. “And it’s just like, that’s just a code word for ‘outside of heterosexual sexuality.’”